I will say at once that I had to paint the armour twice. It so happened that I botched the first version when it was practically finished (I might tell you about that mishap sometime later). That’s why I had to re-paint it just a few days prior to the fest. I usually take my time with painting and proceed at a leisurely pace=) But this was not the case, however.

First off, I apply base colour. In this instance, it is black, although this is not the paint itself, I had a filler primer of the same colour. That way I could start working on metallic parts of the costume straight away: layering on silver colour until it’s uniform and thick.

I then applied a dark-violet colour that was a priming colour for the green. I took great care when I went around the edges so that I wouldn’t have to rework the silver details all over again. Next, I put on one layer of dark-green and on top of that – a layer of green, although I didn’t use it to cover the whole surface of the armour and left the lower parts, the corners – I mean those places that appear to be the darkest – with just one layer of green. I put the third layer, light green this time, on the upper and most prominent parts (for example, the top half of the breast plate). And here come the designs! I used dark-violet to draw the outlines of the armour scales. I also put some yellow to certain contours to make them look more sculptural and dynamic. Finally, the finishing touch was a thin layer of yellow on the most illuminated areas (for example, the same breast plate I referred to earlier). All done! 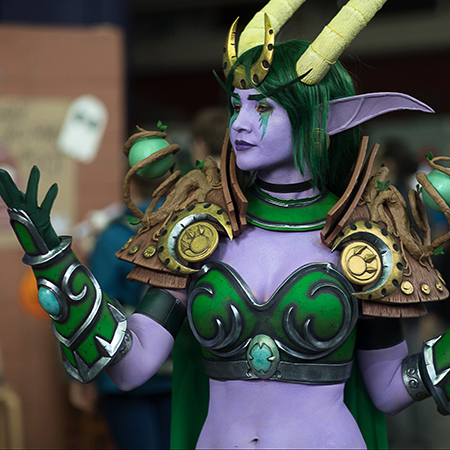